Gazing Balls have been a fixture in gardens since the medieval period when kings placed decorative blown glass gazing balls in their gardens.  Over time the Gazing Ball has transformed and their popularity has expanded with the population.  The rising popularity of the gazing ball has expanded the options that are available to select.  Gazing balls can vary from 2 inches in diameter to 22 inches.  However, at Iron Elegance we offer gazing balls in 12 inches because they are considered the best sizes to display in the lawn. 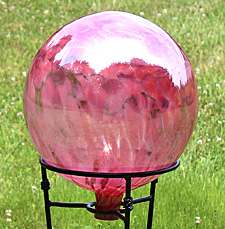 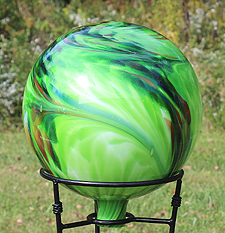 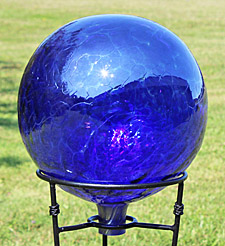 Gazing Balls can be made using a variety of materials.  Here at Iron Elegance, we have been making our gazing balls for over 10 years using blown glass.  Blown glass allows us to create a number of variations in design, size and style. We have also found that glass gazing balls have a better quality to them than stainless steel, ceramic or stained glass gazing balls.

Gazing balls have as varied and colorful a history as they are themselves.  The first recorded history of these hand-blown glass garden accents dates back to the 13th century where they were made in Venice.  In 1612 an Italian priest, Antonio Neri, named them "Spheres of Light".  They have been known by many names - Gazing Globes, Rose Balls, Good Luck Balls, Victorian Balls, and Garden Globes.  Also called "Globes of Happiness", they have been used symbolically as wedding gifts - said to bring the bride happiness in her new home.  In the 16th century Francis Bacon stated that a proper garden would have round colored balls for the sun to play upon.  They gained their current widespread popularity during Victorian times, being used both indoors as well as in the garden.  One interior use was in dining rooms and on sideboards.  Placed in such a way, the servant could gaze discreetly into the ball and see who may need a refill without standing and staring throughout the meal.

A collection of lore from different sources includes the following:

Place the ball close to the front door of a house so that if a witch comes calling, she will see her reflection in the ball and stay there to stare at herself.

Called "Garden Gazers" in the South, they were placed at the gate to the front yard so that those sitting on the porches could see who was coming, and have time to either go in and close the door, or go to prepare a glass of ice tea for the guest.

Used in Victorian gardens, a young woman would gaze into them in hopes to catch a glimpse of her future husband.